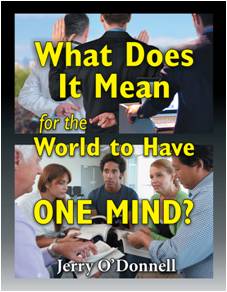 This unique book approaches many important topics of the day by use of the Bible presenting to both believers and unbelievers answers to today's many questions in a manner that allows for no leading whatsoever from the author, followed by the same material with a suggested application of its meaning, and finally followed by the conclusions the author has drawn. This three step approach allows you to come to your own understanding instead of the author telling you what to believe and then shows proof texts.

In this manner, one can get answers for themselves to the questions that have directly and indirectly been on people's minds. Why does there seem to be such a polarization of people around the world? Why is road rage not the only rage between humans anymore? Is there a world agenda? Are believers and unbelievers involved together and even working side-by-side towards the coming crisis? What will the coming crisis cause? Where do we find safety? How do we survive?

With your Bible in hand, this book takes a journey through so many Bible texts that by the end, you will know your Bible a whole lot better than you do now and be ready to stand in face of what is coming.

The content is very direct. It is not meant as an attack upon any people whatsoever, however, it is intended to reveal truth as well as uncover error. Those attached to the error are not condemned but invited to switch over to the truth (Revelation 22:17). It does matter what we believe and in the end it comes down to either believing the truth and being saved (John 8:32) or believing a lie and being lost (2 Thessalonians 2:10-12). So it is with the motivation of love for everyone's soul that we share this information (Ephesians 4:15), and if you disagree with any of it, that is your free will to be exercised without hindrance (Luke 9:54-56). We just hope you would provide the same towards us and not turn around and attack us for simply trying to be messengers we are called to be (Mark 16:15).

What do those three main characters represent? We have a physician, politician, and a preacher, all of which cannot be trusted symbolized by the crossing of the fingers. Despite being very much accepted figures of authority, all three of them have lead people towards having the wrong one mind. And believe it or not, they all are working towards the same goal, just from different angles.

A physician, who represents all doctors of one form or another, have lead society into thinking very much incorrectly with pharmaceuticals, scientists, psychology, sociology, and much more that distorts greatly the truth on subjects of relationships, how people are born, evolution, fighting diseases, climate change, and much more. People are being told that they came from goop, are to have more than one sexual partner, masturbation is not only a good thing but a necessary thing, and it is expected to end up having sex by the third date. People are being told that we must surrender step by step our freedoms not just for protection from terrorists but to help combat climate change, inoculate against diseases, and in the works are laws against unbelievers. Not only are people pressured to vaccinate but laws are requiring them so gone is the freedom to choose, which reveals the common goal -- the removal of freedoms. And there is a solution to many of these problems, and it is called the Mark of the Beast.

A politician, who represents more than a smooth talker, also represents the governments where laws were in place to protect the free exercise of religion but now is in the process of controlling what is and is not allowed to be exercised. And those that are not giving up their free exercise of religion willingly are being scared into it by one form or another. Beware of the phrase, "For the better good of all…". And for the better good of all, we ought to unify the world to accept the Mark of the Beast.

A preacher, who represents more than just a single minister but whole denominations and the vast majority of Christianity as well other religions, all seem to be working in unison to get people to believe the same thing but not necessarily according to the Bible. Each denomination is not seeing it because they all may retain their names, however, the doctrines unique to each denomination are talked about less and those held in unison are talked about more. Of course most prayers eliminate Jesus Christ, and they use the more universally acceptable name of God. And ultimately they are all unifying under one leader who works against the doctrines of Christ, hence the term antichrist. Of course society has misused the term so that people are looking for a person like Hitler, Saddam Hussein, Stalin, possibly Bill Gates, even Ronald Wilson Reagan, and others, when all the while operating quietly and appearing like an angel of light doing good has been making great strides drawing people to the ultimate anti-Jesus Christ item, the Mark of the Beast.

And what is this gathering? Why it is a serious Bible study! It is the key that reveals the worldwide deceptions and shines light in every dark place. Despite scientists and psychologists telling us how outdated and impractical the Bible is, the truth of the matter is that it is the only source that offers eternal life. Despite the governments trying to ban it, condemn it, and put restrictions on it, people have chosen to obey God rather than man! Besides, being obedient to the government grants only a life of peace with the government paying taxes while alive and in many cases paying even more taxes upon death. Not that we ought to cease paying taxes but the Bible again is the only source of eternal life and where the government and the Bible contradict, the Bible ought to be chosen. And who would think that of all people to work against the Bible would be preachers, but they do. This raises the question of who really is God. If preachers can declare what is and is not inspired, are they not making themselves out to be above that which is called being of God? That is, are they not putting themselves above the Bible? If preachers can excuse away certain practices or find a verse contradictory to all the other verses to justify their position, does that not make them out to be God also, even above the Bible? By preaching only those verses that support their position while ignoring all others, does that not put them into a place of controlling those in attendance, a form of brainwashing? Only believers of all of the truth shall receive eternal life (John 5:39). Now by the use of "all", we are referring to living up to all the light or knowledge one has as well as could have obtained. Purposeful ignorance is condemned (John 3:19-20).

Jerry O’Donnell was personally challenged to read the Bible for himself, so when the Lord opened an opportunity to do so, he took advantage of it by reading the entire Bible in one month. At the end, he saw so many contradictions practiced by so many Christians of which contradicted themselves, and asked himself how such confusion could be pleasing to God. At the same time, many questions were being raised in his mind that required answers, so a diligent study was underway.

Following the pattern set forth in Isaiah 28:9-10, the journey began. The verses starts off with "Whom shall he teach knowledge? and whom shall he make to understand doctrine?" That is exactly what was desired to be learned and understood. Now reading on to find out how to get that, Isaiah wrote, "[them that are] weaned from the milk, [and] drawn from the breasts." So the first step was to get off of the surface stories, the milk, and get into some serious studying, which verse ten tells specifically how to proceed. "For precept [must be] upon precept, precept upon precept; line upon line, line upon line; here a little, [and] there a little." So every precept or lesson is to be taken into consideration, every line or verse is to be gathered, and even the verses that contain a number of thoughts are to be include eliminating the other thoughts and focusing upon the little that is associated with the subject of investigation. Nothing is to be just discarded that touches on the topic being researched.

But that was not the only pattern followed. The Bible also says, "God is not [the author] of confusion" (1 Corinthians 14:33). That means that the verse has to be understood in a manner that there is no contradiction, which is confusion. God would not condemn an action in one place and then permit it in another. God would not uses verses to undo others.

As a result of years of studying, he set forth to share his findings. Starting out in conducting numerous Bible studies, moving on to holding seminars, and now sensing the nearness of time, the most up to date information at hand is presented in this book.

It is the author's desire that all would give as much diligence to making one's "calling and election sure" (2 Peter 1:10).